Mostly invisible, but always indispensable: that's the best way to describe the products and solutions offered by Freudenberg Sealing Technologies in Weinheim, Germany. The company is a supplier, developer and service partner for the world's automotive and civil aviation industries. The company's customers do, however, extent to many other sectors such as machine and ship building, the food and pharmaceuticals industries, wind energy and the railways. Starting with the oil seal developed by Freudenberg back in 1929, the company's product range includes an ever expanding range of sealing technologies. In 1997, the Encoder was brought onto the automotive market as an integrated sensor system to use RPM data to control brake and engine management systems.

The global Freudenberg Group has expanded to include eleven subsidiaries that manufacture household products and software and other IT solutions, for example. Since 2008, the IT department at the largest subsidiary has been organized at an European level. "We then took our IT department to the global level in 2013. We were faced with the need to record our costs from around the world, report them in an uniform manner and then allocate them to the various services we offer", recalled George Molchan, Global Head of IT and CIO at Freudenberg Sealing Technologies in Weinheim. They also wanted to increase transparency and end the "tiresome discussion that IT is too expensive."

First, the global department created a catalog of the services it offers to its internal customers, which also serves as a pricing and reporting tool to streamline and automate IT cost management as much as possible on a global basis. The goal was to professionalize the local IT budgeting process and replace the manual processes with Excel spreadsheets and a flurry of emails sent back and forth.

Because Freudenberg Sealing Technologies team was not certain that a sufficiently comprehensive solution was available on the market, it began to search for a software provider. The bidders were given three months to draft a proof of concept to show that Freudenberg's requirements could be met and that a switch from cost centers to allocation prices would even be possible. Of the five providers contacted, some passed on the project due to the high level of global effort involved and others were not prepared to submit to the required no-obligation trial run.

Finally, Freudenberg opted for nicetec's IT finance management solution netinsight. "That was in terms of content and cost the most attractive offer", says Kerstin Zeeb, Head of IT Services & Governance. In addition, she liked nicetec's professional and pragmatic approach that fits well with the management style at Freudenberg Sealing Technologies, where a major emphasis is placed on entrepreneurial action. The individual companies of the group are responsible for their own results and are thus rewarded for actively managing their IT costs. The software tool should help their management teams to ask the relevant questions as a basis for good decisions.

When the proof of concept was presented to the Freudenberg management at the end of the test phase, the concept and functions offered by nicetec's netinsight convinced them right away. "The added value for all involved was immediatly apparent," says Molchan. In particular, the standard reporting of IT costs, despite different systems and structures, was imprressive. Freudenberg also found the self-service portal giving controllers and IT managers in subsidiaries around the world instant access to current contracts, hardware inventories, product catalogs and price lists to be a big plus. Their "single point of truth," where all of the available information converges, provdes a consistently updated overview and a high degree of transparency.

The ability to mix different currencies in a budget plan and represent prices for services in both euros and dollars played an important role for the global Freudenberg group. "netinsight already has a multy-currency function by default allowing users to create budgets in different currencies. We expanded the existing functionality when Freudenberg Sealing Technologies asked for the solution to allow the use of different currencies in a single budget plan," explains Ralf Meyer, CEO of nicetec. The same applies to the own-cost process, a web-supported budgeting process designed to make it significantly faster and more convenient.

netinsight, the modular IT financial management solution from nicetec, has more than 220,000 licensees in Germany and is one of the most successful standard platforms for IT controlling, cost allocation and financial management for IT service providers and companies. The solution provides the corresponding components for all possible scenarios. The IT Financail Controlling Module (ITFM) is the core module that provides a powerful planning and cost accounting solution.

Seamlessly integrated, are other elements for IT cost accounting such as SLA/contract management, product catalogs, bid management, documenting client acceptance of IT services, as well as IT cost allocation in terms of cost and revenue. There are also various data collection interfaces to integrate various data sources, reporting tools and a web portal for employee self-service.

"All of the IT finance functions can be centrally mapped in a comprehensive platform resulting in a considerable reduction of complexity," says Ralf Meyer. This allows budgeting and costing, target-actual comparisons and simulations to be performed as well as usage-based cost allocation in conjunction with SAP systems. For Freudenberg Sealing Technologies, it was particularly important to be able to invoice certain services on an as-used basis, for example in the form of invoices for service tickets processed or the number of devices in each department.

Convenient reporting leads to an objective discussion of IT costs

Once set up, costing on an as-used basis is fully automated via the service catalog and service rates, as is the collection of usage data and their allocation to services and customers. netinsight supports all invoicing methods whether on a contract basis or usage basis. Services are billed on a highly flexible as-used basis, allocated to the specific consumer of the services across national borders and currencies.

The IT billing module allows even extremly large volumes of transaction data to be collected quickly from operational IT systems, company voice and data networks, and asset management systems and fed into the cost allocation process and then billed to each of the company's cost centers on an as-used basis. "The controllers in the subsidiaries thus receive up-to-date, detailed information about those services that are being consumed and how much they will cost," Kerstin Zeeb adds.

The clear presentation of the services actually used in each department should lead to more objective discussions about IT costs. This also applies to investments in hardware; for example, when a department wants to purchase new printers. Because it will have to pay for them directly and not hide them in general IT costs, this will lead to more reflection about the need and value of such expenditures. Kerstin Zeeb: "It is especially important for the departments to feel that they can control their internal IT costs."

This is particularly aided by the powerful reporting functions in netinsight. The regular IT finance meetings in the company with the manual budget controlling, assembling information from various databases and systems, and preparing Excel spreadsheets and PowerPoint presentations are now a thing of the past. All that's needed now is a push of a button. Without any manual preparation or follow-up, the software's reporting tool provides graphically enhanced reports and budget plans, including historical comparisons if required.

Our reporting and analysis module is a full-fledged business intelligence solution," says Ralf Meyer. Authorized users can access real-time custom reports based on current data in a web browser or create entirely new reports, ad hoc queries or analyses that can then be shared with colleagues and customers. Report updates can be scheduled and emailed to groups of recipients automatically as a PDF document or Excel spreadsheet.

Freudenberg Sealing Technology has begun to implement the system as presented after finishing the successful proof of concept. A mini project team headed by Kerstin Zeeb has quickly been able to implement the global IT budgeting for 2014 using the new tool. Gradually, other functions were then added with the necessary data fed into the system. "User feedback has been very positive, because they realize it is making their work easier," says the project manager. At the same time, errors are reduced by automation and costs are being cut, but the main effect is primarily the long-term increase in transparency, leading to more cost sensitivity. In particular, usage-based billing of IT services has changed user behavior and is lowering IT costs that get hidden in the budget and for services that go unused or do not create added value. As Kerstin Zeeb point out, Freudenberg now has a tool unlike any they have had before: "We might have been able to do this with SAP Business Warehouse, but it would have become a massive and complex development project with costs to match. Instead, we opted for a flexible standard solution with support from its maker, which for us was the best decision." 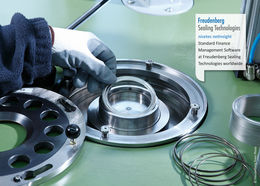 Freudenberg Sealing Technologies with a turnover of about 2,000 (€ million) has approximately 17,000 employees around the world. Taking the IT department of the biggest subgroup of the Freudenberg group to the global level in 2013, they were faced with the need to record their costs from around the world, report them in an uniform manner and then allocate them to the various services they are offering. They also wanted to increase transparency and end the "tiresome discussion that IT is too expensive."

You can download the Freudenberg Sealing Technology Case Study as a PDF (664 kb).