ikb Data GmbH in Düsseldorf is one of Germany's leading providers of IT infrastructure and data security services. Founded in 2004 as a shared service center for the IKB Deutsche Industriebank AG, ikb Data has since become an established player on the IT infrastructure outsourcing and consolidation market.

ikb Data now offers its many years of experience handling a bank's sensitive data to customers in other sectors: companies from all over Europe who value secure processing of their own data and that of their customers. More than a quarter of ikb Data's sales are now generated outside the IKB Group - and this figure continues to grow.

In the past, ikb Data used its own in-house Microsoft Excel-based solutions to plan, calculate and recalculate its projects. "Due to our increasing success on the broader market, we absolutely had to switch theses key processes to a more professional and audit-safe procedure," says Kurt Huckriede, Financial Manager at ikb Data. Because the company had to calculate and create new bids for its two largest existing customers at the time, there was concrete pressure to act in mid-2013.

Individual adaption and expansion of the standard solution

In order to find a solution quickly, the three leading tools on the market were given an intensive examiniation by ikb. "We opted for netinsight due to its high level of flexibility, its strenghts in billing and the possibilities offered by the graphical representation of dependencies", Huckriede reveals. Decisive was the most comprehensive coverage possible of the IT infrastructure provider's individual requirements. The main objective was being able to establish a modular product catalog that would allow the prices for individual services to be calculated on the basis of a multi-stage calculation process and the ability to assign to different cost centers intelligently.

Other tasks that needed to be solved with the help of netinsight including modeling custom price structures in different price lists, making bids based on a highly granular product catalog, and usage-based cost allocation including billing to customer-specific accounting systems. "In addition, there were some special requests such as the division of product prices into the categories of hardware, software, and services," says Nicole Haak, Project Manager at ikb Data, about the complexity of the project. Likewise, setting up an automatic interface to SAP SD to allow the invoices created in netinsight to be modelled in SAP sales orders as well as subsequent invoicing and transfer to the accounting department. Individual adjustments to the billing process were also required, such as group hierarchies. Overall, what had once been a very highly individualized quotation process were to become standardized and largely automated.

"About 70 percent of our standard solution can be used out-of-the-box, while the remaining 30 percent had to be adapted, either by customizing different parameters or by targeting specific requirements," explains nicetec Managing Director Ralf Meyer. In this particular case, the required amount of adaption was rather higher due to the customer's wish to allocate price data to categories not originally available in the standard edition.

For ikb Data, however, it is very important to be able to allocate a price calculation for a service very accurately to hardware, software and services. "nicetec responded very quickly to theses requirements and, despite the enormous time pressure, provided the necessary development capacities to make it happen," Nicole Haak says.

The modular IT finance management solution netinsight from nicetec GmbH has more than 220,000 licenses in Germany and is one of the most successful standard platforms for IT controlling, cost allocation and financial management for IT service providers and companies. The solution provides the corresponding components for all possible scenarios. The IT Financial Controlling Module (ITFM) is the core module that provides a powerful planning and cost accounting solution.

Seamlessly integrated are other elements for IT cost accounting such as SLA/contract management, product management, bid management, traceable approvals of IT services as well as IT cost allocation in terms of cost and revenue. There are also various data collection interfaces to integrate various data sources, reporting tools and a web portal for employee self-service.

"All the functions can be centrally mapped in a comprehensive platform resulting in a considerable reduction of complexity," says Ralf Meyer. ikb Data's very granular product catalog and the introduction of additional dimensions meant a massive amount of data for use in price calculations that was a challenge: "There are huge amounts of data that come with allocating costs, but that is also an advantage because they allow you to trace the price structure in detail." But nonetheless no compromises were needed when it came to performance.

The beginning of the project was marked by a kick-off event in late August 2013, in which several division of the IT service provider participated. After documenting the current processes and drafting a proposed solution in accordance with the client's objectives, the cost centers and cost allocation rules the product catalog began to be created. In early November 2013, the calculation results and bid creation processes were added. Subsequently, the solution was further refined and a benchmarking test was conducted.

After the billing and invoicing processes werde finished in the first quarter of 2014, the overall solution was ready for productive operation in time for the start of the new fiscal year on April 1, 2014. Throughout the entire process, which had been done in stages based on an initial priorization process, the solution was customized, new components developed, the interface adapted, various tests performed, individual modules put into service and updates were made.

"We had a very tight schedule that could only be met because nicetec met every one of its promises, although there were always individual adjustments to be made," says Nicole Haak in praise of the efficient partnership that she charcterized as "very cooperative, and constructive." For them, these factors are very important, "because many issues in this kind of project were able to be resolved with very lean decision-making processes by mutual agreement."

nicetec was also able to react very flexibly and directly to the repeated changes to the original concept that became necessary in the course of the project, such as last-minute additions and adjustments that they were able to begin to implementing right away without the budget spinning out of control. The project manager also appreciates the user-friendly intuitive operation of the platform: "We were able to do a lot of it ourselves quite quickly," including uploading and processing data or setting up processes. Overall, the core team for this project at ikb Data consisted of two employees full-time who were assisted by another three colleagues at various times.


Transparent process in an audit-proof environment

Today, ikb Data GmbH is now able to put together transparent service packages for its customers much more simply and quickly and offer a fully traceable price calculation at any time. This has given ikb's sales team a completely new basis for talking about pricing with their clients.

Differences between the originally agreed scope of services and those actually required can now be continously traced and used to renegotiate contracts, for example. "We now have a transparent process in an audit-proof environment," says Mr. Huckriede about the biggest advantage of the new solution.

By standardizing the entire bidding and invoicing process, which is now stable and automated despite very differentiated billing models and large amounts of data, a number of manual procedures and the risk of error has decreased. "netinsight meets all our requirements and we are very satiesfied with the outcome of the project," says Nicole Haak.

In its tenth year after founding of the Düsseldorf IT infrastructure company all of the conditions are set for further expansion under the new slogan "ikb Data - Safe in Germany". The company will be offering a wide range of products in the fields of data hosting, cloud services and data discovery. 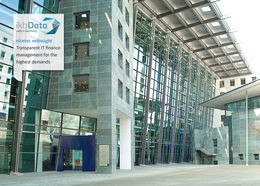 ikb Data GmbH in Düsseldorf is one of Germany's leading providers of IT infrastructure and data security services. In the past, ikb Data used it's own in-house Microsoft Excel-based solutions to plan, calculate and recalculate its projects. Due to the increasing success on the broader market, they absolutely had to switch these key processes to a more professional and audit-safe procedure.